NOI – Nature of Innovation. South Tyrol’s technology park connects companies, researchers and students so innovation can thrive. Located on the grounds of a former aluminum production plant in the southern part of Bolzano, NOI Techpark is a great working and living environment, with a business incubator for start-ups, workplaces and laboratories as well as catering services and cultural offers. The technology park’s coworking spaces, open-air theatre, park and restaurant/bar are open to anyone looking to immerse themselves in this innovative environment.

How to find us 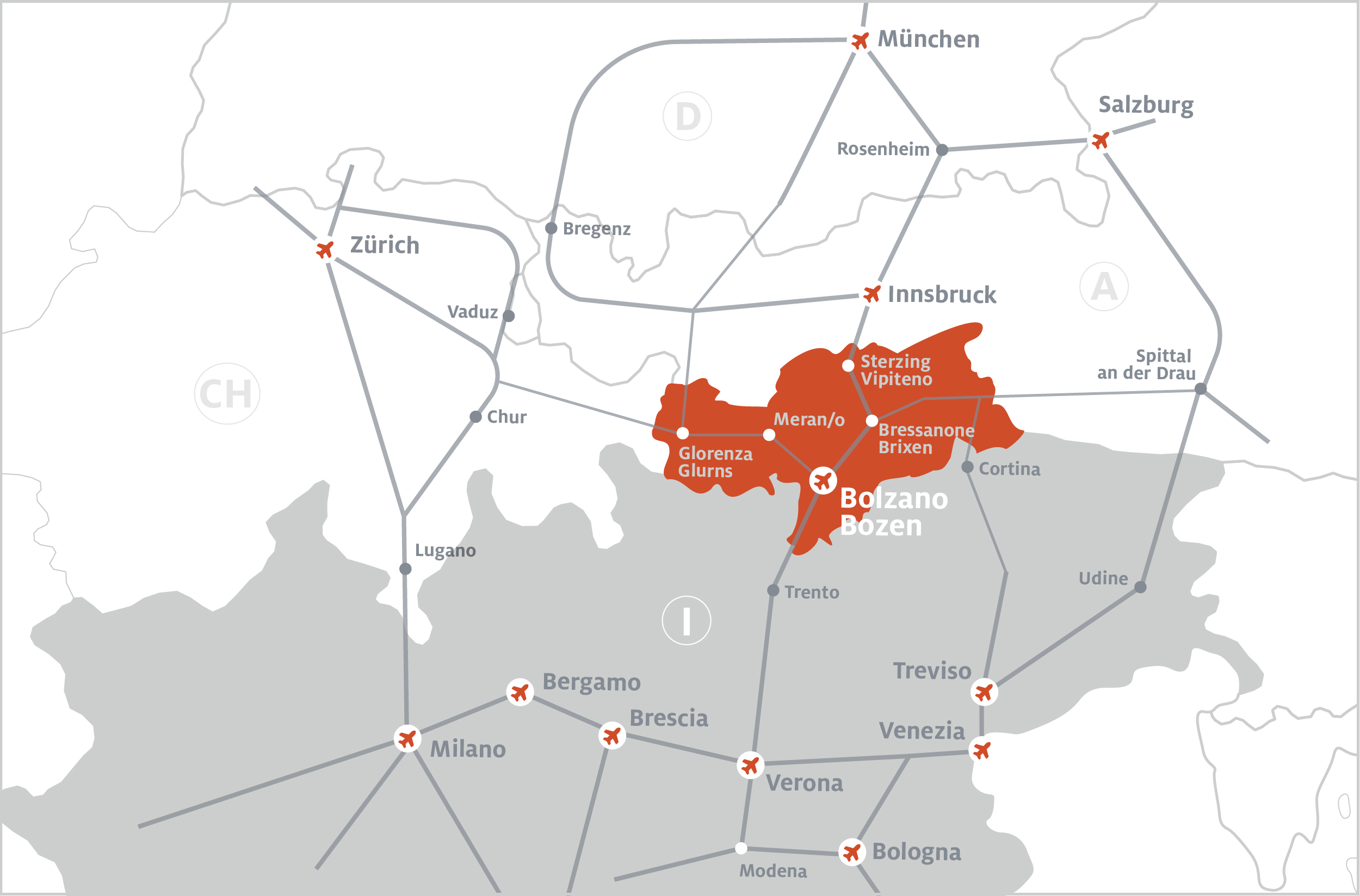 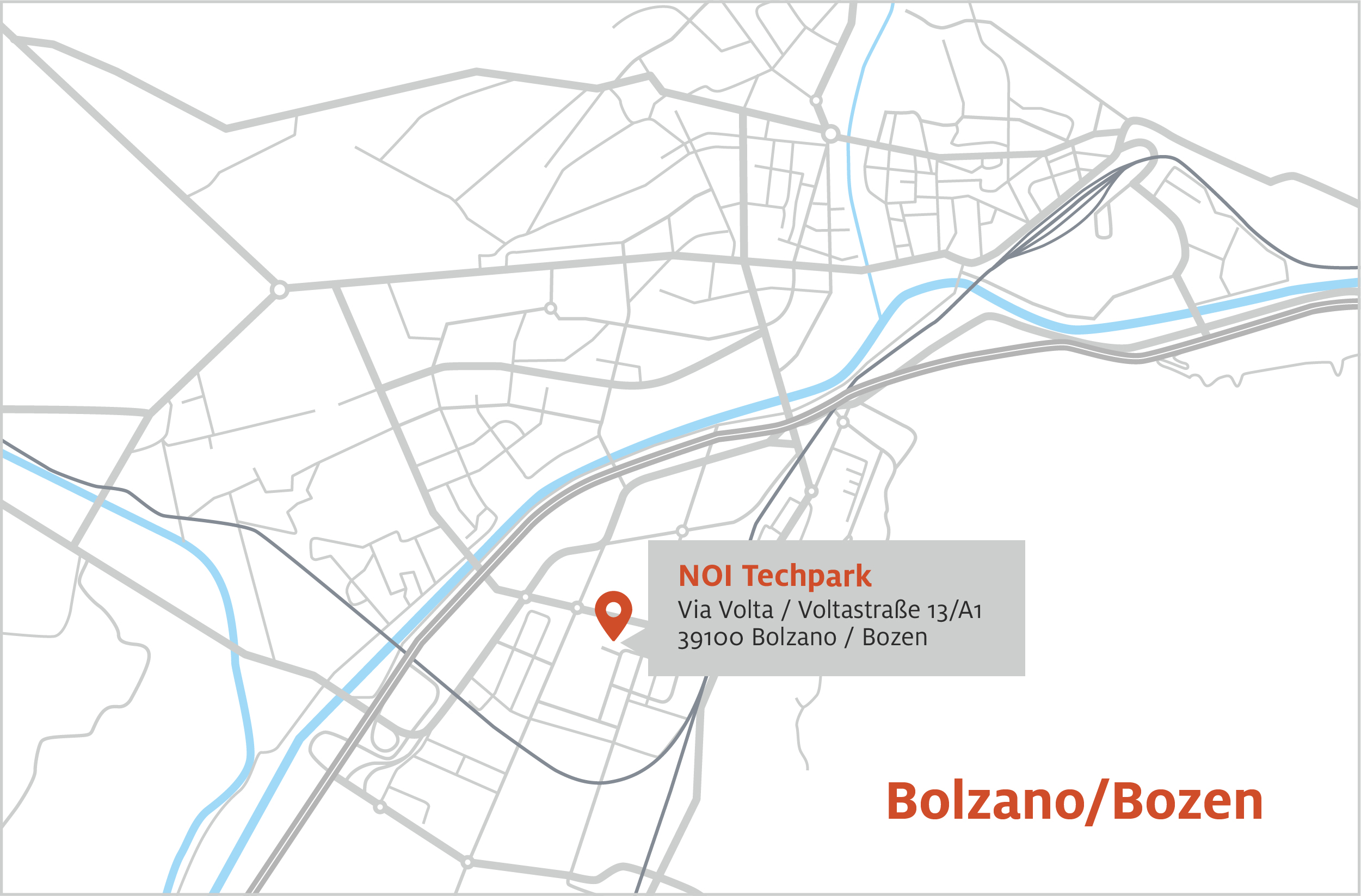 Bolzano-Bozen is the Capital of the Autonomous Province of Bolzano, in the North of Italy, in the Region of South Tyrol (Südtirol or Alto Adige) situated on the border to Austria, at 265 m above sea level. Its population reaches approximately 100,000 inhabitants. The region is unique for its rich cultural tradition combining the German, Italian and Ladin speaking communities, identities, life styles and languages. It is famous for its precious Alpine natural resources including its valleys, passes, rivers, lakes, vineyards, apple orchards and typical small villages that make the visit and stay in South Tyrol exclusive. Another of South Tyrol’s attractions are the many local feasts, food tastings and folkloristic events organised throughout the year.

Bolzano is known as the “Door to the Dolomites”: formed about 260 million years ago, the Dolomites were declared a World Heritage Site by the UNESCO Commission in 2009. The WHS area covers about of 231,000 hectares, divided between different provinces. The Dolomites, are not only a paradise for climbers and hikers, but also for skiers, offering 30 winter holiday resorts in the Ortler Skiarena and Dolomiti SuperSki carousels, which are easily reachable in a short amount of  time either by public or private transport. Thanks to the Autonomy Statute, the region of South Tyrol, enjoys special autonomous administrative powers which help support the sustainable development of its unique cultural tradition while preserving its precious alpine resources.

This website uses cookies to improve your experience while you navigate through the website. Out of these, the cookies that are categorized as necessary are stored on your browser as they are essential for the working of basic functionalities of the website. We also use third-party cookies that help us analyze and understand how you use this website. These cookies will be stored in your browser only with your consent. You also have the option to opt-out of these cookies. But opting out of some of these cookies may affect your browsing experience.
Necessary Always Enabled
Necessary cookies are absolutely essential for the website to function properly. This category only includes cookies that ensures basic functionalities and security features of the website. These cookies do not store any personal information.
Non-necessary
Any cookies that may not be particularly necessary for the website to function and is used specifically to collect user personal data via analytics, ads, other embedded contents are termed as non-necessary cookies. It is mandatory to procure user consent prior to running these cookies on your website.
SAVE & ACCEPT